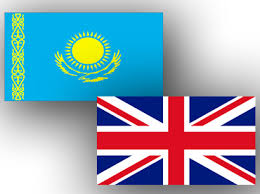 Қызылорда қаласы
И.В. Панфилов атындағы № 5 мектеп-лицей
Ағылшын тілі пән мұғалімі
Оналбаева Айгуль Нурхашовна
“Kazakhstan and Great Britain”
Lesson type: a competition lesson.
Aims:
to teach students to express their own points of view and work in groups;
to develop skills of reading, listening, speaking and unprepared speech;
to enlarge country studying knowledge and educate the feeling of love towards
our motherland.
Objectives: SWBAT develop their skills of reading, speaking, listening and  unprepared speech.
Items needed: an interactive blackboard, photos, flags and maps of the UK and  Kazakhstan, cards.
Procedure of the lesson
I. Greeting.
Teacher:
Good morning, dear students and guests!
I’m very glad to see you at our lesson, which will be held in the form of competition between two teams. I’ m sure you will demonstrate what you know about these two great states: Kazakhstan and Great Britain.
The theme of our lesson is “Kazakhstan and Great Britain”.
The aims of our lesson you can see on the screen.
II. Introduction.
I want to introduce you the members of our jury:
1st
2nd
3rd

It’s time to introduce you. I would like the captains to present their teams.
Let’s start our competition.
III. The first round.

Teacher: Students, look at the screen. You’ll see the questions you should  answer.
1. How many regions are there in Kazakhstan? (14)
2. When do we celebrate the Independence Day? (on the 16th of December)
3. Who is the head of Kazakhstan? (President N. Nazarbayev).
4. What kind of state is Kazakhstan? (democratic republic with the presidential
form of government).
5. What is the biggest river in Kazakhstan? (The Irtysh).
6. What was Kurmangazy? (a composer).
7. What river is Astana situated on? ( The Ishim).
8. What chambers does Kazakh Parliament consist of? (the Senate and the Majilis).
9. When was the last Constitution approved? (on the 30th of August).
10. What is the state language of Kazakhstan? (Kazakh).
11. What kind of state is the UK? ( a constitutional monarchy).
12. Whose name is everything done in? (The Queen’s).
13. What is the state language of the UK? (English).
14. What chambers does the British Parliament consist of? (The House of
Commons and the House of Lords).
15. What Party is the Tory Party? (The Conservative).
16. What is the official name of the UK? (The United Kingdom of Great Britain
and Northern Ireland).
17. What party is the Whigs Party? (The Liberal).
18. What city is the capital of Scotland? (Edinburgh).
19. What city is the birthplace of Shakespeare? (Stratford-on Avon)
20. What is the longest river in England? (The Severn).
21. Where is the residence of the Prime-Minister situated in? (Downing Street
№10).
22. What was Robert Burns? (Scottish poet).
23. What is the national emblem of Wales? (Shamrock).
24. What universities are the oldest and prestigious in Great Britain? (Oxford and
Cambridge).

IV. The second round.

Read and complete.
1. In the east Kazakhstan borders on … . (China).
2. The main lake is … . (Balkhash).
3. The powerful industrial oblast in the east of Kazakhstan are … .
(Pavlodar and Ust-Kamenogorsk).
4. When the capital was transferred from Almaty, the city got a symbolic name
… . (Astana).
5. The epic novel “Abai” is the work of … . (Mukhtar Auezov).
6. The Sack history is also connected with the struggle against … . (Alexander
the Great-King of Macedonia).

V. The third round.

Make up topics about the national flags of the two states and reproduce them  orally.

Kazakhstan: The national flag of Kazakhstan is blue. It’s the colour of the cloudless sky, the symbol of peace. According to the heraldy the blue colour    corresponds to such human qualities as honesty hope and faithfulness. In the centre of the flag there is the gold sun, the symbol of life, the course of energy. Rays have the form of grain, the symbol of independence, freedom and state power. The yellow ornament “Koshkar mujiz” is the symbol of the Kazakh art.

Great Britain: The Union Jack is the popular name given to the flag of Great Britain. “Jack is an old word for the sailor. The Union Jack is a mixture of several flags. It all began in 1606 when Scotland was joined to England and Wales. The Scottish flag, blue with a white cross from corner to corner, was joined to the English Flag, white with a red cross. Later, in 1801, when Ireland was joined to the Union, the Irish Flag was added, white with a red cross from corner to corner. In this way the English people got the Union Flag which is red, white and blue.

VI. The fourth round.

VII. The fifth round.

Find mistakes and correct them.
I team.
1. I said to friend I will go to Astana the next week.
( I told my friend I would go to Astana…)
2. Ascar asked me if I have seen Aisha Bibi’s Mausoleum.
(Askar asked me if I had seen Aisha Bibi’s Mausoleum.)
3. The teacher asked us who is the first cosmonaut of Kazakhstan.
(The teacher asked us who was the first cosmonaut of Kazakhstan.)

VIII. The sixth round. “Polyglot”

IX. The seventh round.

Recognize the sightseeing.
(There sights of Kazakhstan and Great Britain on the screen).

X. The eighth round. “Captains’ competition”

I see, our today’s competition is coming to its end and the last round will be for captains.
Dear captains you should answer my questions. You’ll get one point for each correct answer. If you don’t know the answer, you’d better tell me “Go on!”
You have only ten seconds to think.

The questions for the 1st captain:
1. The largest river in Kazakhstan. (The Ishim)
2. The national dress of the Scots. (kilt)
3. When do we celebrate The Constitution Day of Kazakhstan?(the 30th of
August)
4. The masterpiece of Christopher Wren. (St. Paul’ Cathedral)
5. When did T. Aubakirov’s first flight to other space take place? (1991)
6. What vegetable do people use for Halloween party? (pumpkin)
7. What city do we live in? (Taraz)
8. Two popular gentlemen associated with Baker street.(Sherlock Holmes and
Doctor Watson)
9. Name the great Kazakh musicians. (Kurmangazy Sagurbaev, Ahmed
Zhubanov, Nurgisa Tlendiev)
10. The national emblem of Scotland. (thistle)
11. Whose monument is there near the oblast drama theatre in our city?
(Baurzhan Momysh Uly)
12. The minimum voting age in England. (18)

The questions for the 2nd captain:
1.The most important river in England. (The Thames)
2. The national musical instrument of the Kazakhs. (dombra, kobyz)
3. The permanent seat of the BRITISH PARLIAMENT. ( Houses of Parliament)
4. Who was the first Kazakh cosmonaut? (T. Aubakirov)
5. The official name of the Houses of Parliament. (Westminster Palace)
6. Translate the name of Kazakh national food “besbarmak” (five fingers)
7. The English writer whose famous novel is “Robinson Crusoe” (Daniel Defoe)
8. The first name of our city. (Talas)
9. What is the capital of Wales? (Cardiff)
10. What anniversary is going to celebrate the capital of our country, Astana?
(the 10th)
11. Where do children find Christmas presents? (in stockings or under the
Christmas tree)
12.Read the first line of the national anthem of the Republic Kazakhstan.
(Алтын күн аспаны…)

Teacher: Dear students! Dear guests!
Our competition is over. Let’s see our results.
Well, the jury, it’s time to declare the winners of our today’s competition.
(The jury announces the result of the competition).
Teacher: Thanks a lot to everyone for taking an active part at our lesson.
Good bye! I wish you success and luck.
See you soon!